Researchers at the Neural Stem Cell Institute and its parent non-profit organization, the Regenerative Research Foundation, are discovering new ways to improve nerve repair.  We have recently recruited investigators working at the forefront of Parkinson’s Disease (PD) research, bringing their expertise to NSCI. With initial competitive funding from the New York State stem cell program (NYSTEM) we have already made exciting progress. Specifically, we have developed a new technique to generate human dopamine neurons (the cells that die in PD) from stem cells in large numbers.  This enables us to move forward on two important fronts – first, the supply of stable, healthy neurons for development of cell replacement therapies in PD patients and second, the production of mass quantities of cells that can be used to screen libraries of drugs to find therapeutics that slow or prevent PD progression. 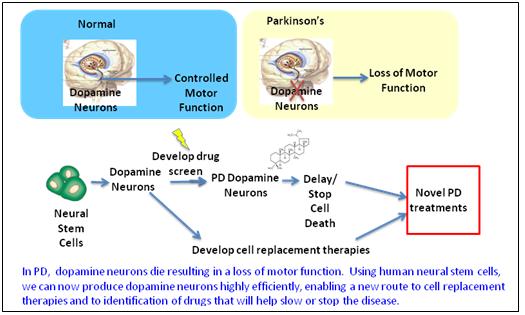 In PD, a very specific set of cells in the brain called dopamine neurons die. These cells are responsible for regulating our movement. As these neurons die, patients start to have difficulty walking and eventually can become immobile. PD affects approximately 0.5 – 1 million patients in the US alone and current therapeutic strategies in PD are limited. We still know relatively little about the disease, for example why these specific cells are dying, and because of this, drugs cannot be made properly. Pharmaceutical companies have libraries of compounds that could be useful if we can create a drug screening model that is highly relevant to PD. Our latest research has shown that we can successfully generate these human dopamine neurons in large numbers, sufficient for these cell-intensive drug screens. It is imperative that we determine whether we can use these normal cells in two ways. Firstly, we perform animal testing to determine whether these human dopaminergic neurons will be suitable for cell replacement therapies. Secondly, we use them to create a disease model to mimic PD in the culture dish, allowing clinical drug studies to seek compounds that prevent their death.

The NSCI is the first independent neural stem cell research institute in the USA. It was co-founded by Dr. Sally Temple, a scientist who helped discover and define nervous system stem cells. She has recruited highly talented individuals to work on translating discovery research to find new therapies for central nervous system repair. The Institute is a state of the art facility with first-rate investigators and staff who are hard-working and dedicated to finding solutions to these pressing health problems. The multiple programs that NSCI runs allow valuable cross-pollination. Our collaborations with researchers at major academic centers around the world allow us to take advantage of the latest technology and research findings, focusing these on central nervous system regenerative therapies. We are uniquely positioned to make headway in this exciting research environment, and your gift will enable us to take the defined steps needed towards novel therapeutics.